Are you displeased with the number of moles on your body? Are you having second thoughts on having your moles removed? Let us get you acquainted with the scientific explanations of mole removal, according to Dr. Leila Fard.

Should we or should we not remove the moles?

One of the most common reasons why clients attend skin and beauty centers is to have a mole removed. If the mole has not caused you any health issues indicating that it has not grown to be larger in the past year, it has not bled, and its surface has not been rough, you can ignore it. If one or more of these items happen to your mole, it is better that you consider treating and removing it. With the physician’s discretion, these types of moles should be examined first and then removed with a cautery device or laser. Concerning moles that do not cause any health issues but are bothering you in terms of looks and aesthetics or are in areas that get caught on your clothes, you can remove them in one or two sessions with a laser and cautery device elegantly and very precisely.
The freckles left after the removal remain darker or lighter than the surrounding skin for about 2 to 3 months. Eventually, they gradually shift to the same color as the skin. Sometimes a small hole is left, which is automatically filled up in 4 to 6 months.

Dr. Leila Fard:
I am not currently pursuing this practice.

What device is used to remove a mole?

Cautery devices that destroy mole tissue with a low and concentrated heating value are very diverse. One of the most efficient cauteries in the world is the American Ellman cautery, whose electrodes are thin and delicate.

Dr. Leila Fard:
The American Ellman cautery that we use to remove moles is one of the best cautery devices in the world. The electrodes of this device are as thin as a strand of hair, which makes enable us to remove the moles rather delicately and carefully.

Does mole removal have side effects?

Everyone is anxious when it comes to mole removal; clients are concerned their skin might sag or blemishes appear on the spot. If the mole is correctly diagnosed by a qualified and competent physician and removed with a suitable cautery device, the chance of sagging and blemishes appearing will be very little. Moles that are too large and massive should be removed through a surgical procedure and are not proper for cautery removal.

Dr. Leila Fard:
Fortunately, throughout all the span of my career, as a result of the right selection and diagnosis of the type of mole and using the American Ellman cautery device, clients have never encountered any complications such as sunken appearance, blemishes, or relapses. However, I am not pursuing this practice at the moment.

How long does the recovery period of a mole removal procedure take?

Usually, the recovery period and primary care take approximately one to two days. The freckles left after the removal remain darker or lighter than the surrounding skin for about 2 to 3 months. Eventually, they gradually shift to the same color as the skin. Sometimes a small hole is left, which is automatically filled up in 4 to 6 months. 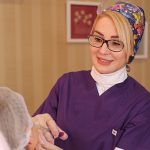 How can we enjoy a more defined jawline with non-surgical methods? 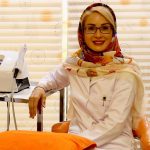 What is the treatment for dark circles and the sunken areas around the eyes?